In this chapter we will use the lobstr package7 to help answer questions regarding the internal representation of R objects.

Q1: Explain the relationship between a, b, c, and d in the following code:

A: a, b, and c point to the same object (with the same address in memory). This object has the value 1:10. d points to a different object with the same value.

Q2: The following code accesses the mean function in multiple ways. Do they all point to the same underlying function object? Verify this with lobstr::obj_addr().

A: Yes, they point to the same object. We confirm this by inspecting the address of the underlying function object.

Q3: By default, base R data import functions, like read.csv(), will automatically convert non-syntactic names to syntactic ones. Why might this be problematic? What option allows you to suppress this behaviour?

A: Column names are often data, and the underlying make.names() transformation is non-invertible, so the default behaviour corrupts data. To avoid this, set check.names = FALSE.

Q4: What rules does make.names() use to convert non-syntactic names into syntactic ones?

A: A valid name must start with a letter or a dot (not followed by a number) and may further contain numbers and underscores ("_"s are allowed since R version 1.9.0).

Interestingly, some of these transformations are influenced by the current locale. From ?make.names:

The definition of a letter depends on the current locale, but only ASCII digits are considered to be digits.

Q5: I slightly simplified the rules that govern syntactic names. Why is .123e1 not a syntactic name? Read ?make.names for the full details.

A: When 1:10 is called an object with an address in memory is created, but it is not bound to a name. Therefore, the object cannot be called or manipulated from R. As no copies will be made, it is not useful to track the object for copying.

Q2: Explain why tracemem() shows two copies when you run this code. Hint: carefully look at the difference between this code and the code shown earlier in the section.

A: Initially the vector x has integer type. The replacement call assigns a double to the third element of x, which triggers copy-on-modify.

We can avoid the copy by sub-assigning an integer instead of a double:

Please be aware that running this code in RStudio will result in additional copies because of the reference from the environment pane.

Q3: Sketch out the relationship between the following objects: 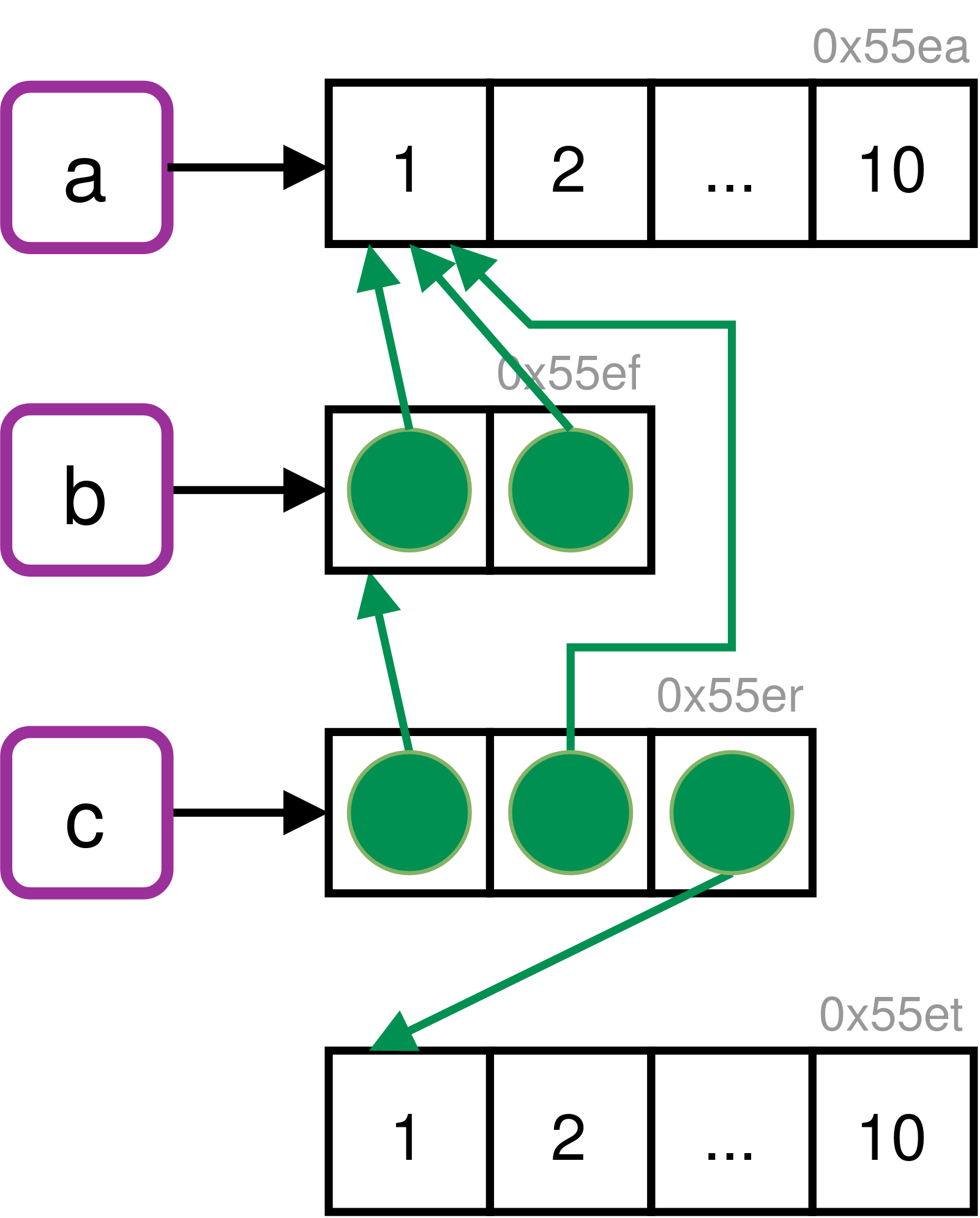 We can confirm these relationships by inspecting the reference tree in R.

Q4: What happens when you run this code:

A: The initial reference tree of x shows that the name x binds to a list object. This object contains a reference to the integer vector 1:10. 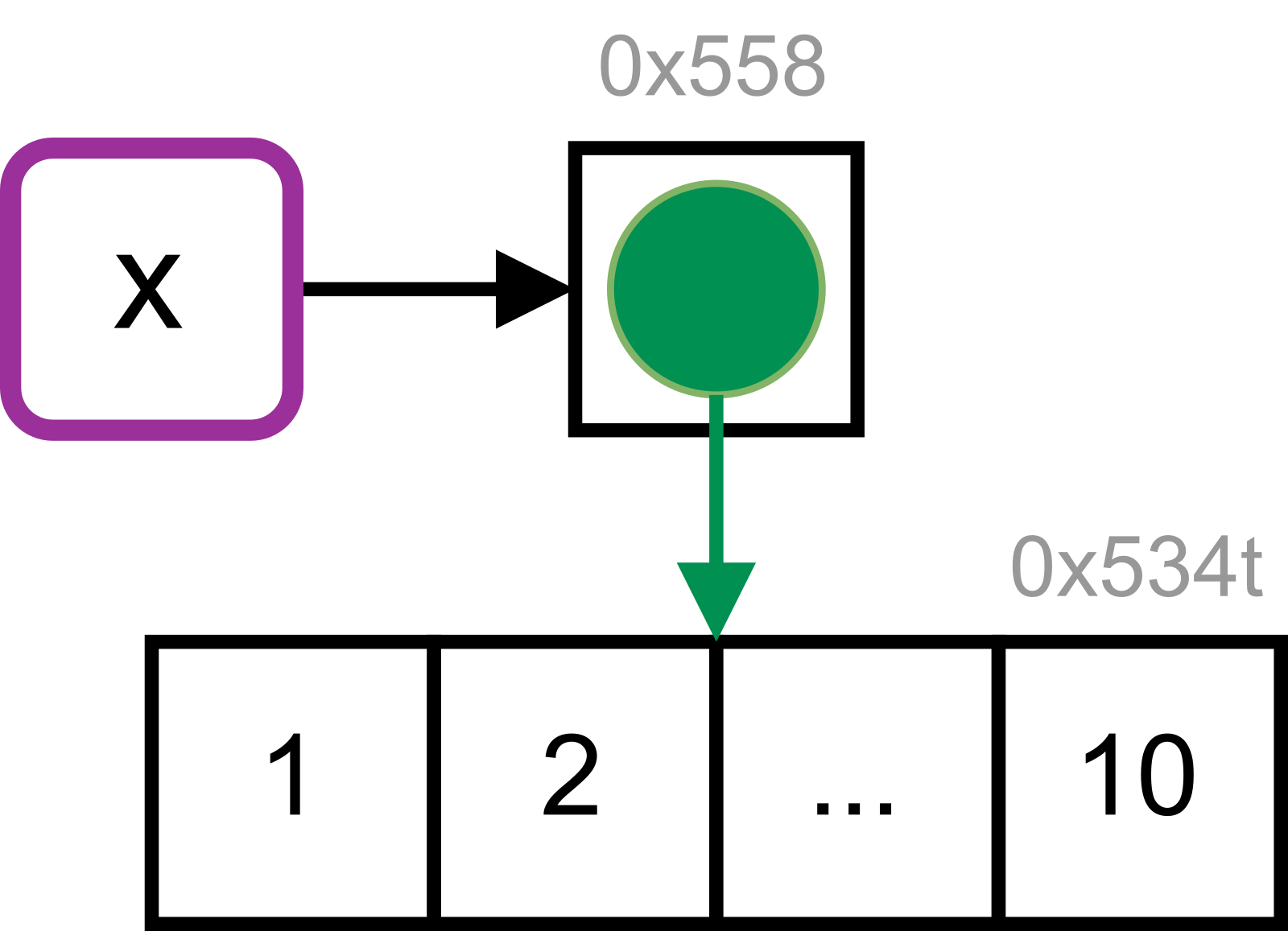 When x is assigned to an element of itself, copy-on-modify takes place and the list is copied to a new address in memory.

The list object previously bound to x is now referenced in the newly created list object. It is no longer bound to a name. The integer vector is referenced twice. 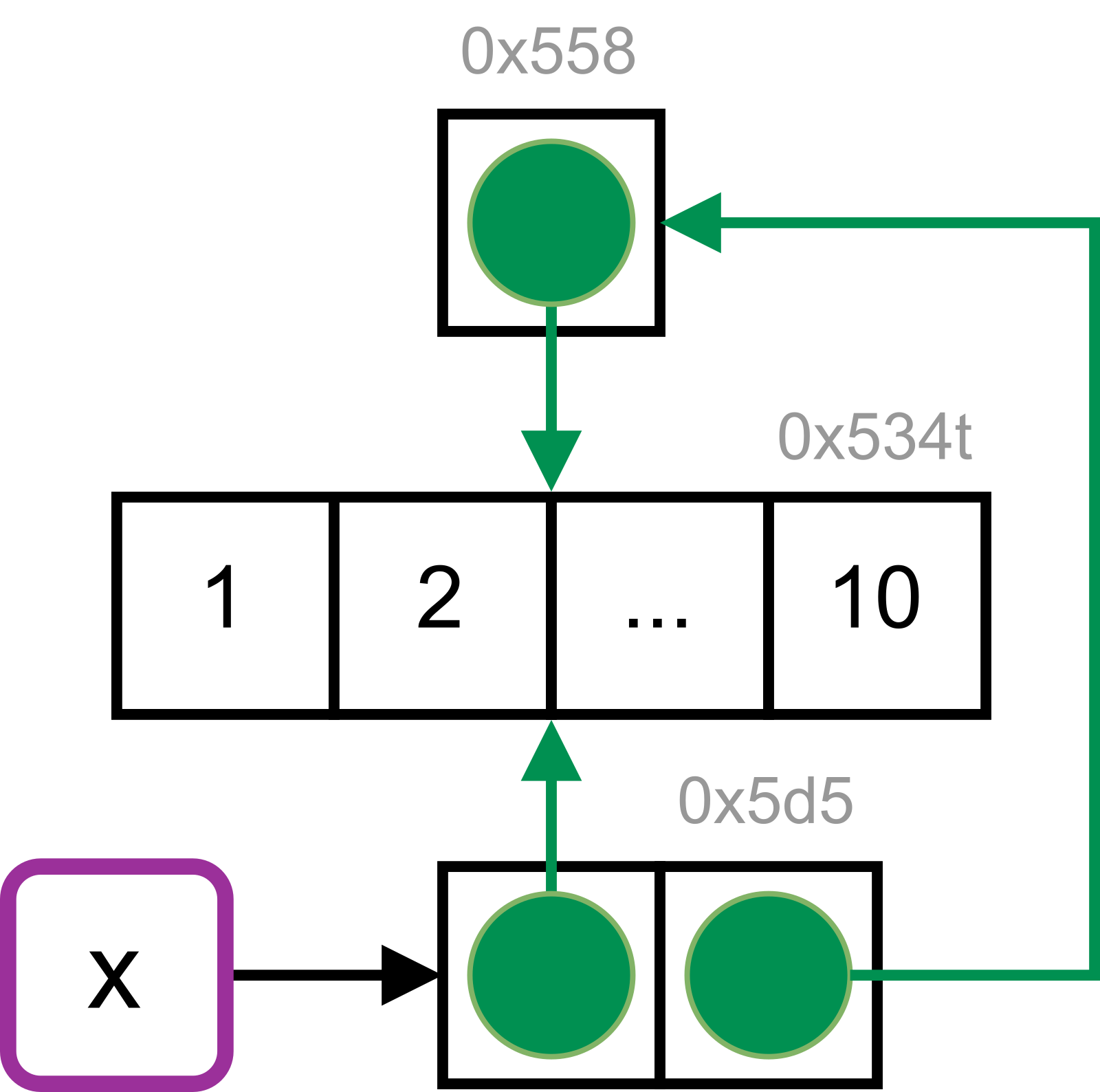 Q1: In the following example, why are object.size(y) and obj_size(y) so radically different? Consult the documentation of object.size().

A: object.size() doesn’t account for shared elements within lists. Therefore, the results differ by a factor of ~ 100.

Q2: Take the following list. Why is its size somewhat misleading?

A: All three functions are built-in to R as part of the {base} and {stats} packages and hence always available. So, what does it mean to measure the size of something that’s already included in R?

Let us look for how many other objects this applies to as well.

The following packages are usually loaded by default.

To look up all functions from these packages we iterate over base_pkgs and apply ls() and mget() within each iteration.

This gives us more than 2700 objects which are usually available by default.

Q3: Predict the output of the following code:

A: In R (on most platforms) a length-0 vector has 48 bytes of overhead.

A single double takes up an additional 8 bytes of memory.

(If you look carefully at the amount of memory occupied by short vectors, you will notice that the pattern is actually more complicated. This has to do with how R allocates memory and is not that important. If you want to know the full details, they’re discussed in the 1st edition of Advanced R: http://adv-r.had.co.nz/memory.html#object-size).

For b <- list(a, a) both list elements contain references to the same memory address.

The second element of b still references the same address as a, so the combined size of a and b is the same as b.

When we modify the second element of b, this element will also point to a new memory address. This does not affect the size of the list.

However, as b doesn’t share references with a anymore, the memory usage of the combined objects increases.

A: In this situation copy-on-modify prevents the creation of a circular list. Let us step through the details:

Q2: Wrap the two methods for subtracting medians into two functions, then use the bench package to carefully compare their speeds. How does performance change as the number of columns increase?

A: First, we define a function to create some random data.

Next, we wrap the two approaches to subtract numerical values (in our case medians) from each column of a data frame in their own function. We name these functions depending on whether the approach operates on a data frame or a list. For a fairer comparison, the second function also contains the overhead code to convert between data frame and list objects.

This lets us profile the performance, via benchmarks on data frames with differing numbers of columns. Therefore, we create a small helper that creates our random data frame and its medians before it benchmarks the two approaches by employing the bench package.8

The bench::press() function allows us to run our helper across a grid of parameters. We will use it to slowly increase the number of data frame columns in our benchmark.

Finally, we can plot and interpret our results. 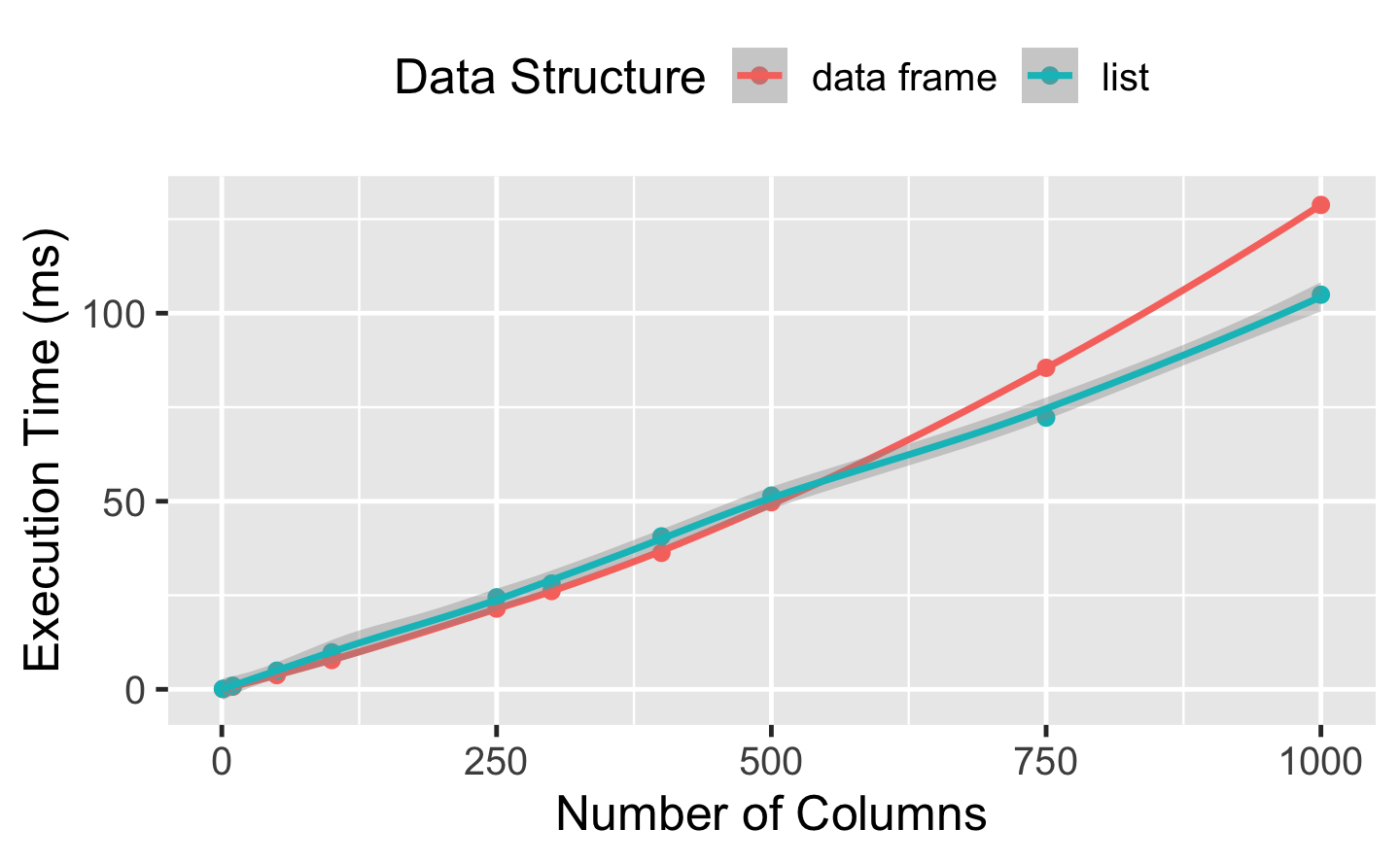 Obviously in the long run, linear growth creates shorter run-times, but there is some cost to this strategy — we have to convert between data structures with as.list() and list2DF(). Even though this is fast and probably doesn’t hurt much, the improved approach doesn’t really pay off in this scenario until we get to a data frame that is about 300 columns wide (with the exact value depending on the characteristics of the system running the code).

Q3: What happens if you attempt to use tracemem() on an environment?

A: tracemem() cannot be used to mark and trace environments.

The error occurs because “it is not useful to trace NULL, environments, promises, weak references, or external pointer objects, as these are not duplicated” (see ?tracemem). Environments are always modified in place.